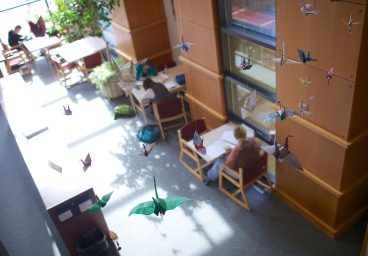 The WCC Library was known as a Learning Resources Center (LRC) in its infancy during the 1970s and up until 1996. Known for its non-traditional approach to library service, the LRC provided delivery of learning materials and instructional equipment to the various college class locations around Whatcom County. Initially lacking a formal, organized collection, it encouraged faculty and students to utilize other existing libraries in the county.

Over the years, funding was allocated to support creating a more traditional library and to provide direct library services to faculty and students on campus. As the college grew, the LRC expanded as well. The LRC moved a half dozen times until 1996, when it assumed a new name as the WCC Library, and in 1997 moved to its current location in the Heiner Center where the collection has grown to over 40,000 items. In keeping with the original spirit of the LRC, the WCC Library proudly continues to obtain and deliver the best information available to faculty and students in traditional and non-traditional ways.

The library is a part of the Washington Community & Technical College Library Consortium (WACTCLC). The libraries use the Alma system for their library services platform. The library formerly was a member of the Orca Consortium, a smaller group of Washington state community college libraries that used the Voyager system.

The WCC Library serves as the historical archive for Whatcom Community College. The archive includes the following collections: